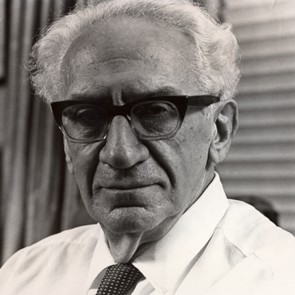 A summary of the historical work of Immanuel Velikovsky


Immanuel Velikovsky was a man who caused much commotion in the scientific world, especially in the fifties, but also thereafter many called him a pseudo-scientist. He was born in 1895 in Vitebsk in Belarus, Russia. In 1921 he moved to Berlin, then to Palestine in 1924 and in 1939 he settled in New York. He had a psychoanalytic practice and at some point after 1940 he threw himself into historical research. He died in 1979.
The turmoil that he caused was in two different areas. The first was in the field of astronomy, because he developed the theory that the planets in our solar system in the far distant past did not follow the same orbit around the sun as they do now, but regularly, even in the recent past, some changed direction due to near-collision with one another and the exchange of planetary discharges. Secondly, he caused a stir among archaeologists and experts in Egyptian, biblical and Greek history, because he changed the usual dating of events and civilizations and arranged them in a different way. In this article I will discuss the historical work of Velikovsky to assess whether there is any truth in his view of ancient history. Basically I will confine myself to making a detailed summary of his historical work. This work was published in several parts between 1952 and 1978. Some parts of it were never published, but can be found in the Internet archive of his work. I started making this summary because I found Velikovsky's claims fascinating, and because I wanted to be able to make a better judgement of the value of his statements, especially since I could not find an extensive summary of this very complex and vast work anywhere.

The Exodus
Velikovsky began his research believing that the Exodus of the Jews out of Egypt took place in a period of major natural disasters. The ten plagues that Moses announced were natural disasters and the fact that, after that, the Jews were able to flee the country, indicated that government power in Egypt had been overturned by these disasters. But when did disasters (say a very big earthquake) occur that might have caused the collapse of the Egyptian empire?
In Egyptian history there is the well-known collapse of the Middle Kingdom, which was followed by a dominance of the "Hyksos" for a few hundred years. Then came "The New Kingdom" with pharaohs like Tuthmosis, Amenhotep IV and Tutankhamun and Ramses, to mention just a few well-known names. The orthodox view is that the Exodus could not have coincided with the collapse of the Middle Kingdom, because it is assumed that the Middle Kingdom pharaohs lived much earlier than Moses and his successors.
During the period of the New Kingdom Velikovsky found no signs of a complete collapse, but in the Ipuwer-papyrus he found Egyptian texts that described a collapse of power. This text had similiarities with the description of the Exodus and the text had characteristics of texts from the Middle Kingdom, but if the Exodus took place at the end of the Middle Kingdom, then was the Exodus older than what was thought, or was the end of the Middle Kingdom later than thought? Soon, Velikovsky developed his hypothesis that the orthodox view of Egyptian history was about 600 years too old. In the course of 1940 Velikovsky began his research into ancient history of the Middle East and he worked on this until his death in 1979. He published his research in a series of works that he called "Ages in Chaos".

How did the dating of dynasties come about?
Libraries abound with books about Egyptian history and most texts use approximately the same dates. Can all the writers and scholars invariably make the same big mistake? In the first volume of Ages in Chaos Velikovsky claims that they did. In the fourth and final volume, entitled Peoples of the Sea, he elaborated on how this error could have arisen.
The earliest attempt to organise the sequence of pharaohs was made by the Egyptian Manetho in the third century BC. The division of dynasties that he made is still used nowadays. Of this classification a large part was never confirmed by later research and, of the dynasties that we came to know a lot about, (the 18th and 19th), we now know that Manethos list contained many inaccuracies. Of the existence of some dynasties, no evidence has been found. At the very least, Manetho's classification was not quite reliable.
Anyway, there was a list. If a king could somehow be dated accurately, an estimate of the others could be linked.
Such a dating was set up through the "great year", or the "Sothic year. Egypt had long appreciated a year of 360 days. At a certain moment in time Egypt began to use a year of 365 days, but that adjustment was not enough. In 238 BC, in the Canopus Decree", it was noticed that the year thus lacked a quarter of a day and that once every four years a leap day should be added to prevent the annual festival of the star Isis from going "astray through the seasons".
Censorinus wrote in 238 AD that the Egyptians had a great year that began with the rise of the dog star on the first of the month Thoth. Assuming that Sothis was the dog star (Sirius), he calculated that this great year must have lasted 1,461 years (4 times 365 + 1). He added that, one hundred years before he was writing, a new Sothic period had started. Thus, the previous Sothic period should have started in 1322 BC. In a manuscript, Theon of Alexandria spoke of the great era that began with pharaoh Menophres and he calculated that this was in the year 1321 BC. The question arose, who was Menophres?

A star or a planet?
The Canopus Decree mentions the star Isis and the Isis-festival and also speaks about Sothis (which is probably Sirius), and it was assumed that Isis and Sothis were one and the same star. Velikovsky, however, assumed that that was not the case. If Isis (Sothis) were a star, a Sothic period would last for 1,461 years, but if Isis was the planet Venus, then a Sothic period would actually be an Isis period. That period would be one of eight years, because in eight years the Earth orbits the Sun exactly eight times and Venus five times, with no noticeable difference. Every eight years Venus rises on the same fixed date. In the time of which we speak, the orbit of Venus was watched closely and perhaps with fear and trembling by people. The return of Venus in the sky (after orbiting behind the sun) was celebrated annually. For the Egyptians this was an important day, but for dating historical events, dynasties or kings it had no value whatsoever. There are no signs that the Egyptians used the Sothic period as a way to count years or eras. Moreover, it is it is hardly believable that Egyptians would have divided their history into a series of 1,461-year periods.
According to Velikovsky, the dating of Egyptian dynasties was not correct and thus the dating of virtually all other civilizations of that time in the Middle East and the Mediterranean was also incorrect. For example, if an image of Tuthmosis III is found in a layer in Knossus or in Mycenae, then the dating of these civilizations will be established according to Egyptian chronology.
In one way or another Ramses I was suspected to be 'Menophres'. Other pharaohs who had the name 'Ramses' were put in the 20th Dynasty, since Manetho had given no names to pharaohs of that dynasty (and it followed a dynasty of kings believed to be those of the 19th Dynasty). It was all guesswork, but a kind of guesswork that was generally considered acceptable, because the placement of the most important of these pharaohs, Ramses II who left us the largest monuments, was assumed to have been of the 12th to 13th century BC. Velikovsky, however, claimed that the Egyptian Manetho fought a kind of ideological struggle with the Greeks, who at that time ruled in Egypt. This struggle was about which civilization was the oldest. The Greeks wanted to be the oldest and so a number of Greek historians also placed the Trojan War in the twelfth century BC.

A Lifes Work
The fact that the dating of Egyptian history is uncertain does not necessarily mean that the dating is wrong. It takes more than that to put aside the current dating in favour of a significantly different date. We can say that the review of ancient history was the life work of Velikovsky, even though he was the most famous, most notorious and most mocked because of his book Worlds in collision (1950). This book defended the proposition that not long before the beginning of our era (between 1500 BC and 700 BC), there had been shifts in the orbits of the planets of our solar system, especially the two planets closest to the Earth, Mars and Venus. This work caused a stir, but even then Velikovsky regarded his work on the revision of history as his main task. There are four volumes in the series Ages in Chaos. They are, respectively: Ages in Chaos (1952); Oedipus and Akhnaton (1960); Peoples of the Sea (1977); and Ramses II and His Time (1978). He also wrote volumes that were never published, but they can be found in Velikovsky's archives on the Internet: The Assyrian Conquest and The Dark Age of Greece. In these last two, he worked on a review of the history of the Middle East from the period of the downfall of the Egyptian Middle Kingdom and the Exodus (in his view c.1500 BC) until the arrival of Alexander the Great in Egypt in 332 BC. Later in this paper I will try to summarize the periods covered by these two volumes.
Besides the above-mentioned works, Velikovsky's other published books were Earth in Upheaval (1955), about the physical impact of disasters on the Earth's surface and, after his death, Mankind in Amnesia (1982), which was about the psychological impact of disasters on mankind. Stargazers & Gravediggers (his 'Memoirs' to Worlds in Collision), was published in 1984.